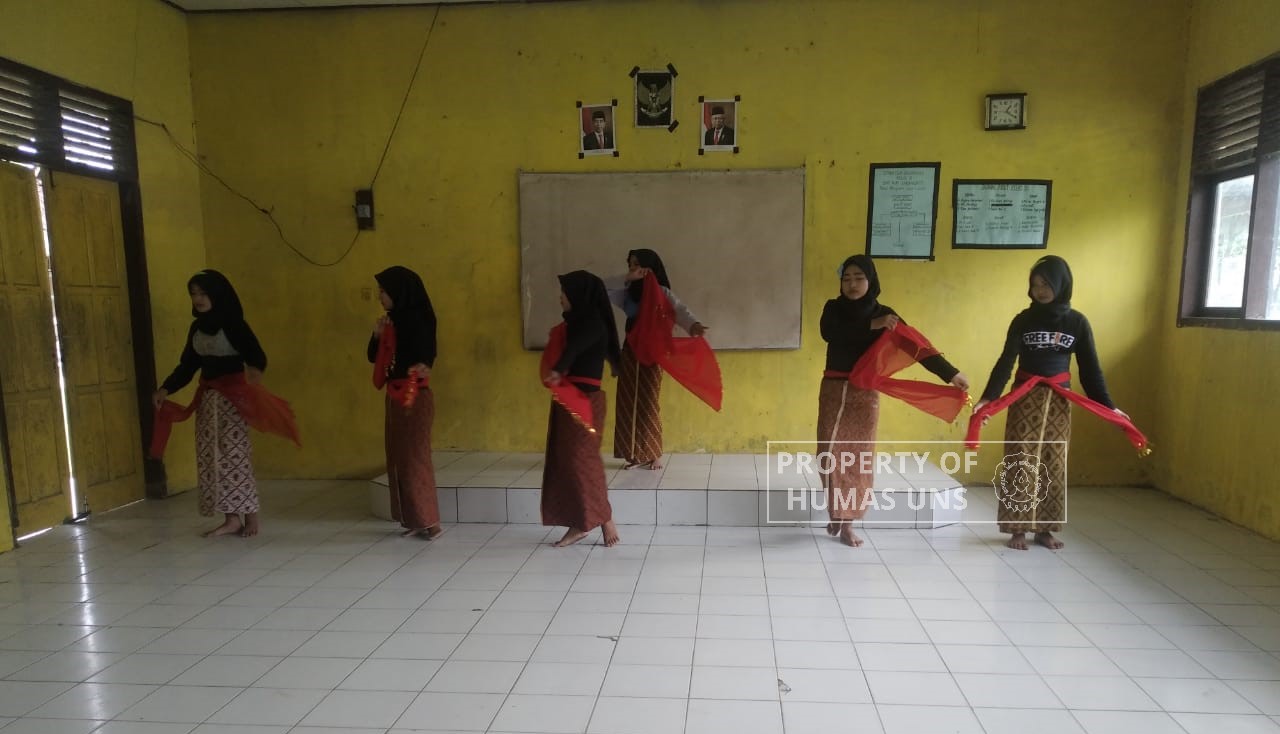 UNS — As an effort to conserve the local art, a Team of Universitas Sebelas Maret (UNS) Surakarta Student Community Service Program (KKN) held training for Tari Bebek (Bebek Dance) and Tari Orek-Orek special from Ngawi Municipality. This training was initiated by KKN UNS Group 31, which deployed in Karangjati Village, Karangjati Sub-District, Ngawi, East Java. Not only the training, but the KKN team also held training in making handicrafts from flannel. This activity has been going on since the beginning of the KKN Program until its peak was held on Sunday (21/2/2021).

Even though the training was conducted via a face-to-face activity, the implementation remains to adhere to the health protocol. “This handicraft training is intended for the RT 01, RW 01 and conducted for 6 times, which has producing handicraft in the form of wallet, small wallet, and pencil case. While the dance training is intended for children and teens in Karangjati Village, Ngawi. The Tari Bebek training is attended by Elementary School students, while Tari Orek-Orek is attended by Middle and High School Students. This division considers the difficulty level of the dance,” explains Nafido Hatmaja Saktry as the UNS KKN Team Leader.

The student of Communication Science Study Program, Faculty of Social and Political Sciences (FISIP) UNS adds that this activity is conducted to increase productivity and reintroducing the culture to the community from an early age. “Especially during this pandemic, we should not be lazy and undeveloped. With much spare time and lack of mobility, it should be used for improving personal competency or improving productivity and learning new things in handicraft and culture. Through this KKN program, hopefully, this objective can be achieved,” he added.

Various activities are conducted by the KKN Team, which gain a positive response from the community, this was expressed by Suwondo, the Head of RT 01 Karangjati Village. “Training, especially for the housewives in RT 01 can improve their knowledge and increasing community collaboration (guyub rukun),” he reveals.

Navido hopes this program can be benefited for the local community. “Hopefully, this program can help the community to stay productive during the pandemic and post-pandemic event. Moreover, the dance training for children is expected to instill the love for culture as an effort to conserve local culture. This activity may not have a direct effect, but I believe that one day this new skill will be useful in the future,” Nafido concluded.  Humas UNS