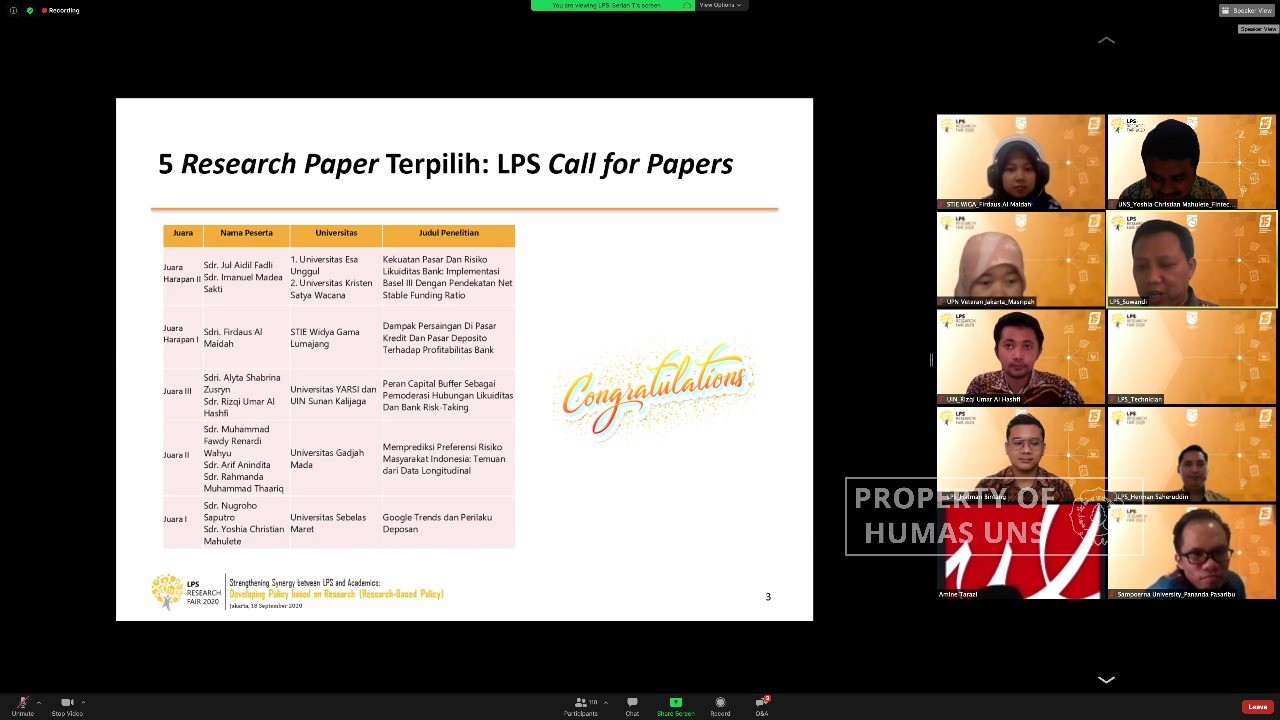 UNS — The team of researchers from the Center of Excellence in Science and Technology (PUI) Center for Fintech and Banking UNS (UNS Fintech Center) led by Nugroho Saputro, M.Ec.Dev won a prestigious achievement as the first place in Call for Research held by Indonesia Deposit Insurance Corporation (LPS). As the first winner, the team from UNS won an award of Rp. 45 million.

The Head of UNS Fintech Center, Irwan Tri Nugroho, Ph.D stated that the winner of this call for research was announced by the Executive Director of Research, Surveillance, and investigation LPS in online LPS Research Fair 2020 on Friday (18/9/2020). In the announcement, 30 papers were submitted to LPS to participate in the competition. From 30 papers, 5 papers were selected as a finalist that must present their paper in a clarification round with the board of jury that consists of prominent academicians and economist such as Prof. Iwan Jaya Aziz from Cornell University USA.

The finalists are also required to present their research paper in LPS Research Fair 2020 forum. In this call for research, the team from UNS submitted a paper titled “Google Trends and Depositor’s Behavior”. The second winner is from Universitas Gadjah Mada (UGM), and the third winner is a combination of Universitas Yarsi and UIN Sunan Kalijaga. In his presentation, Nugroho Saputro, M.Ec.Dev stated that the popularity of bank measured from the high search volume in Google has a significant correlation with the increase in the volume of deposits. Further, the high search volume to measure the depositor’s anxiety using the term “bank gagal” (failed bank) is connected to the volume of deposits, while the term “krisis” (crisis) is connected to the volumes of credits.

“In general, the finding of this study shows that depositors implement a market discipline mechanism in Indonesian banking. Besides that, the finding also shows that Google Trends can be used as an indicator for the regulator to predict depositor’s behavior,” Nugroho Saputro, M.Ec.Dev. stated. Humas UNS