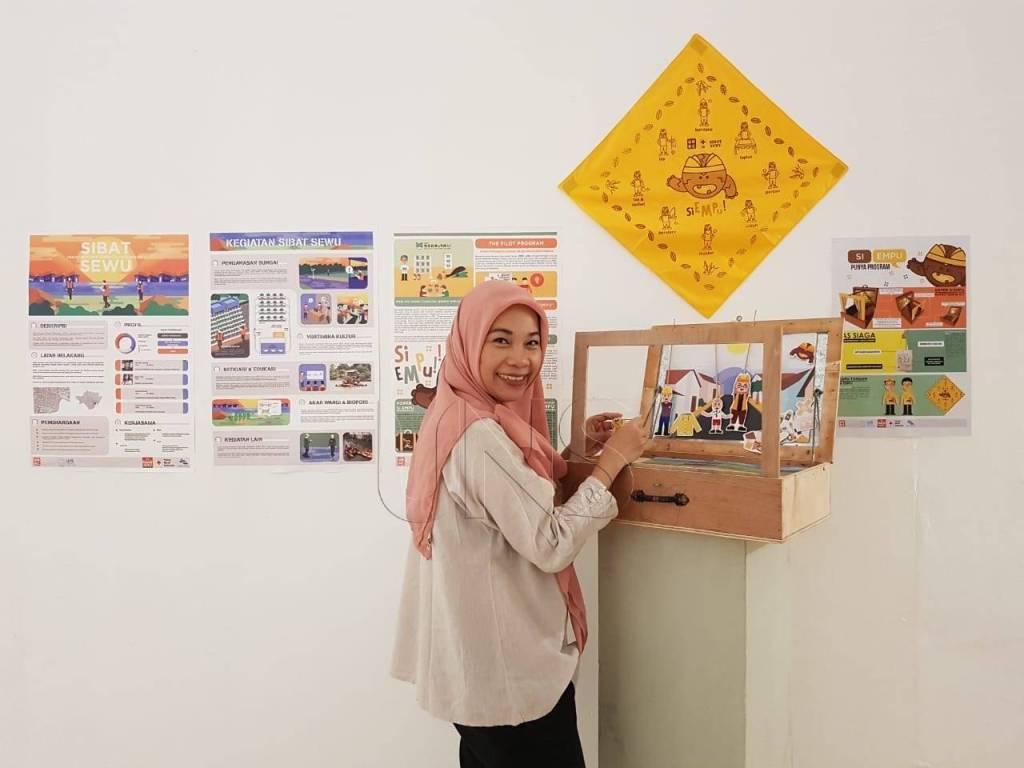 UNS – The disaster that can happen anytime and anywhere demands us to be always mindful. Not only during the disaster, but mindful and watchful attitude needs to be done before a disaster comes as a preventive measure. Reflecting on this reason, the Faculty Member of Architecture Program Faculty of Engineering (FT) Universitas Sebelas Maret (UNS) Surakarta, Dr. Eng. Kusumaningdyah creates a disaster alert bag and handkerchief named “si EMPU Kampung Sewu.”

Si EMPU or Emergency Movement of People of Sewu is inspired by the flood that often hits residents in Kampung Sewu Village, Jebres Sub-district, Surakarta.

“Flood in Kampung Sewu is an annual agenda for the settlement in the embankment before they were relocated. The biggest incident was the big flood at the end of 2007. The knowledge to mitigate the flood with Kampung Sewu people is documented in the form of participatory mapping. We are from Urban-Rural Design Conservation (URDC) Laboratory of Architecture Program FT UNS in partnership with Tissa Florika (Apprentice NPO Art Plus Kobe, Japan) product designer developed a Disaster Tool Kit and Disaster Prevention Activities as a form of documentation on the way to survive and befriend the flood disaster in Kampung Sewu,” Dr. Eng. Kusumaningdyah stated Tuesday (21/1/2020).

Dr. Eng. Kusumaningdyah also stated that the success in exploring the local knowledge from Kampung Sewu is also supported by the community activity with Budi Utomo, Ester, and David ‘Naruto’ as the activist of Komunitas Sibat PMI Kelurahan Sewu, Solo.

Further, Dr. Eng. Kusumaningdyah who is also the Head of URDC Laboratory also told that the idea for selecting icon name ‘si EMPU’ is based on the name of game made from clay that often played by children in Bengawan Solo Riverbank during 1979-1990. Therefore, it is expected that the selection of si EMPU as the mascot of Kampung Sewu can help preserve the story of the traditional games of Kampung Sewu children.

In the future, the production of EMPU will be taught to people in Kampung Sewu through a familiar, interesting, and fun method by adapting the local wisdom and experience with a flood in Kampung Sewu.

“Koper si EMPU is a mitigation program for children in the form of a puppet show. Inside it, there is a tool that supports a mini and interactive show about the knowledge of disaster preparedness. Second, Tas Siaga Bencana designed to teach children to be prepared for disasters. On the outer part, there is a game on the goods that must be prepared when a disaster occurs. Lastly, Sapu Tangan si EMPU has a function to protect the nose from smoke and dust, it can also be used for bandages, rags, emergency bags, and flags,” explained Tissa Florika, the designer of si Empu product.

When asked about the preventive measure through si EMPU, Dr. Eng. Kusumaningdyah explained that she was inspired by Iza! Kaeru Caravan program which is a disaster mitigation program for children and families in Japan initiated by Hirokazu Nagata (NPO Art Plus, Kobe, Jepang). In Japan, Iza! Kaeru Caravan becomes a popular disaster education program for the family because this program offers an interesting method and fun game-based activities.

“So, Iza! Kaeru Caravan was initiated by Hirokazu Nagata after he experienced first-hand the Kobe earthquake in 1995. There is knowledge of disaster mitigation in the form of creative ideas with an interesting design for both adults and children in Iza! Kaeru Caravan,” added Dr. Eng. Kusumaningdyah.