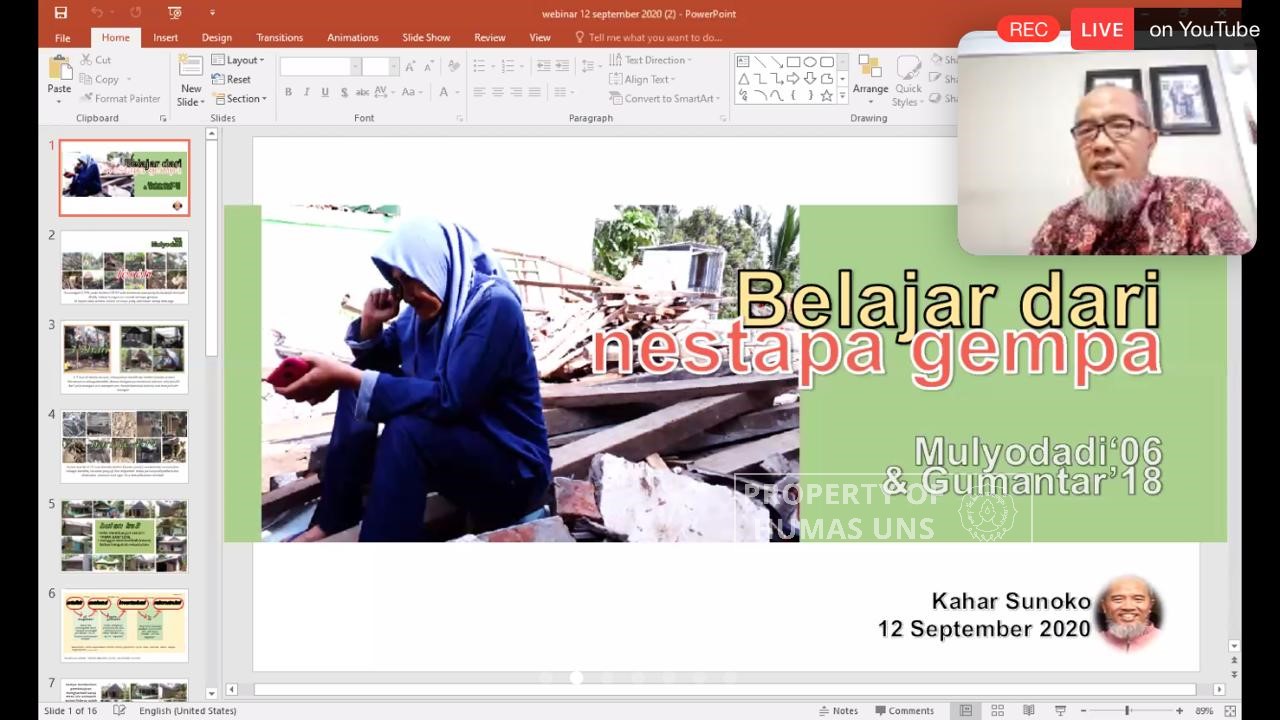 UNS — One of the faculty members from Architectural Engineering Program Faculty of Engineering (FT) Universitas Sebelas Maret (UNS) Surakarta discussed the significance of earthquake disaster in Special Region of Yogyakarta (DIY) and Lombok from the architectural point of view. Dr. Kahar Sunoko discussed it in the webinar held by Master Program in Architecture Universitas Kristen Duta Wacana (UKDW) Yogyakarta on Saturday (12/9/2020) followed by more than 50 participants from general participants.

On the occasion, Dr. Kahar who is also the Chief of Building Engineering Research Group (RG) Architectural Engineering Program FT UNS and member of Construction Structure Laboratory Architectural Engineering Program FT UNS delivered material on Learning from the Plight of the 2016 Mulyodadi Earthquake and Gumantar in 2018. Opening his material, Dr. Kahar described the condition of the earthquake that hit Mulyodadi, a village in Bambanglipuro Subdistrict, Bantul, DIY. Mulyodadi was hit by a 5.75 SR earthquake at 05.59 am which obliterated all buildings in Mulyodadi. “Leseh (obliterated) the physical building no longer exists, does not stand upright and collapses. They call it leseh. People become homeless which saddened everyone. This is the situation they did not expect,” Dr. Kahar explained.

Dr. Kahar stated that 3 – 7 days after the earthquake, the victims live in the bulk tents. Then they moved to shelter or private tent raised near their own house. On the 4 – 17th day, the victims reflect and appreciate the past process on the importance of house as a valuable treasure. During their time in the private tent, the victims started to collect the debris from their house such as from the roof riles, bricks, and furniture to be reused. They consider this debris as their treasure or ‘bandha’, something valuable and useful. Entering the third month, the victims can build their own house. They work together with families in Mulyodadi, reusing debris, and entering the reconstruction stage.

The earthquake that hit Mulyodadi taught several lessons; earthquake provides learning to respect past works even if it has unaesthetic physics. The earthquake motivate the awakening of architectural creativity and earthquakes can be used as a natural curriculum for the birth of an architect’s profile “architecture without architect”.

Moving to 2018, an earthquake hit Gumantar Village, Lombok from 29 July 2018 to 19 August 2018. Dr. Kahar stated that at the time, not all buildings collapsed, and some even stood up as if they hadn’t been hit by the earthquake. The building that is still standing upright is in the form of a simple gazebo called baruga. During 1 – 7 months, the baruga was used as a safe and economical private tent. Dr. Kahar described that at the time, the period of remembering history makes people feel stuttered to read the fate as if what they have been trying hard for so far is not left, while those who are left to receive or inherit are still intact and not collapsing.

At the third month, the victim has not performed an inventory of the debris. They feel uneasy because the debris is not a material for building baruga, bale gampang, bale panggung, or bale jajar. Entering the 7th month, the people started to build a temporary shelter. They received aids at the time and the established buildings used new materials.

“The aids were from PMI and under the coordination with UNS SAR Team that provided stimulant to build houses,” Dr. Kahar explained.

From the earthquake that hit Gumantar Village, Dr. Kahar draw several conclusions; earthquake provided comprehension on the truth of “local wisdom versus global – prestige” values. The earthquake also acts as a reminder on the steps taken to leave local wisdom and earthquake as validation of natural material and how the structure works – natural construction.

Based on the result of Dr. Kahar analysis of the two earthquakes, several conclusions can be drawn. First, the earthquake destroyed the house but the neighborhood was still intact, is the phenomenon of divine power. Then, to feel and live the history which determines spontaneous attitude in developing independent architecture. Besides that, architecture in the past is developed based on the local wisdom will provide a lesson for the future. Dr. Kahar also quoted a say from Ir. Soekarno to close his material.

“A great nation is one that values history. Respect for history becomes a filter for the apparent pursuit of prestige,” Dr. Kahar concluded. Humas UNS