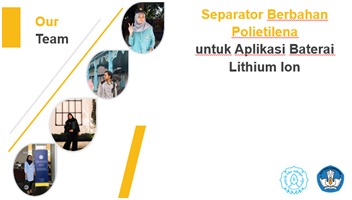 Dewi Nur Hikmah explained that the basic idea from the PKM PE is the increase of portable devices usage but energy storage capacity is still low and the safety of battery for portable devices is still lacking. Further, the supervisee of Dr.Eng. Hendri Widiyandari, S.Si, M.Si. added that most of the current portable devices use secondary type battery because the battery can continue to be used after a recharge. “An example of secondary batteries is lithium-ion. Therefore, further studies needed in this matter. On the other hand, the lithium-ion battery is promising because of its high efficiency, lightweight, and no memory effect,” Dewi as Team Leader explained, Saturday (21/11/2020).

Dewi also stated that in this study they focused on a part of a lithium-ion battery, the separator. This is an important component in a battery that has a function to channel ion lithium and prevent short circuit. The commercial component of this part is polyethylene. They choose to focus on this part because polyethylene has a weakness. Even though this component is a plastic polymer, with good stability, but it has low ionic conductivity and high thermal shrinkage. Low ionic conductivity might lower the performance of the lithium-ion battery. The lower the ionic conductivity, the lower is the battery performance, and vice versa. High thermal shrinkage can increase battery internal temperature and increase the potential of an explosion, reduce durability, and easy to get damaged. To solve this setback, the team offered the installation of composite material in polyethylene separator. Their study found that the addition of composite material on polyethylene separator increases the ionic conductivity and reduce thermal shrinkage.

Talking about the 33rd National Student Science Week that will be held in UGM on 20-29 November 2020 online, Dewi and team are preparing themselves through maximum efforts. They hope that they can win a medal and bring a proud name for UNS. “Besides that, we also hope that our study can be used as a reference to produce lithium-ion battery especially its separator in this modern era,” Dewi concluded. Humas UNS