UNS Students Transform Bagasse and Snail Shells into Partition Board 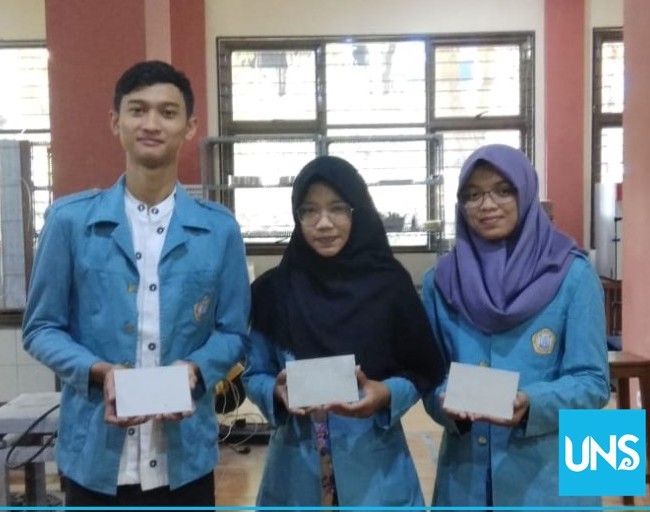 UNS – Golden apple snail is an agricultural pest that can attack crops and it is very detrimental. Contrary to the past, the golden apple snails are cultivated as livestock because it contains many benefits. The enhancement of the snail meat affects the abundant waste of the gastropod shells. In addition, Indonesia is a country with large production of sugar canes. According to FAO in 2015, Indonesia was ranked 9th with 28,4 million tons of sugar canes per year. Bagasse is the waste of sugar manufacturing which can pollute the environment.

Based on the background to reduce the waste of golden apple snail shells and bagasse, three students of Universitas Sebelas Maret (UNS) Surakarta were motivated to conduct a research about SMART-PARTITION (soundproof, anti-fungal, waterproof, and fireproof partition board).  They were Ineke Bela Ramdani a student of diploma program of Civil Engineering, Jeesica Hermayanti Pratama a student of undergraduate program of Chemistry, and Fajar Julian Santosa a student of Agricultural Extension & Communication along with Widi Hartono, S.T., M.T. as the Supervisor. The idea of SMART-PARTITION was defined into a proposal of 2019 Student Creativity Program (PKM).

“We arranged this SMART-PARTITION to reduce environmental problems, especially the waste of gastropod shells and sugar canes. Moreover, considering that Indonesia is located geographically in the earthquakes prone zone, lightweight materials are needed to reduce the risk of the victims,” Ineke said on Wednesday (03/07/2019).

SMART-PARTITION is an innovation of a partition board construction of the golden apple snail shells and bagasse mixture. The substance CaO contained in the snail shells is expected to reduce the use of cement and the carbon and silica contained in the bagasse are expected to reduce sound. With TiO2 and Al2O3 coating technology, made the partition is resistant to fungal and fire. SMART—ARTITION has some advantages, such as soundproofing, anti-fungal, water proof, and fire resistant. The result of this research is the first work that have never done before and it is being applied for the patent and copyright.

Through this research, hopefully SMART-PARTITION is an innovation for constructions in Indonesia and can reduce the waste of golden apple snail shells and bagasse. Humas UNS/Dwi/Try