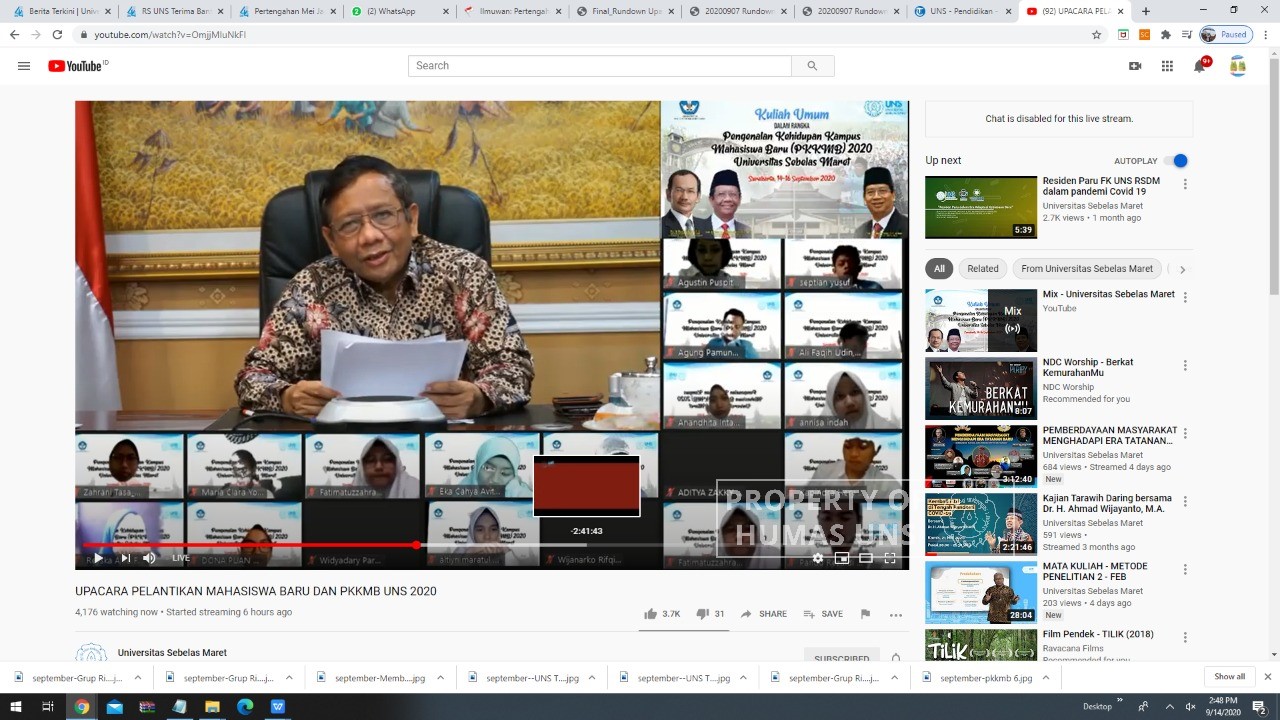 Prof. Mahfud MD who is also a member of UNS Trustee Board for two periods discussed the awareness of state defense for the young generation, especially the new students in UNS for the class of 2020, who will continue the leadership line in the future. In line with paragraph 1 of Article 27 and 30, UUD 1945, every Indonesian citizen has the right and obligation to defend the country, both in the face of the threat of war with other countries and foreign intervention that disturbs the sovereignty of the Republic of Indonesia.

In the general lecture held through Zoom Cloud Meeting and YouTube live stream in UNS official channel, Prof. Mahfud MD stated that state defense in a form of gratitude for Indonesia independence obtained by the founding fathers. Every citizen is also required to prioritize their determination, attitude, and regular, comprehensive, integrated and continuous behavior based on love for the homeland, nation and state, belief in Pancasila and the 1945 Constitution to maintain and defend the integrity and development of the Republic of Indonesia.

The Republic of Indonesia independence, 75 years ago, according to Prof. Mahfud MD is a mercy from Allah the Almighty who wants Indonesia to be more developed and advanced. Thanks to this independence, every citizen can aspire, try, and achieve their dreams. State defense should be implemented according to the citizen’s position, profession, and expertise. Quoting the result of a study conducted by PEW Research Center on the characteristics of Millennials, Prof. Mahfud MD mentioned that the uniqueness of this generation lies in the intense use of the internet as a basic necessity.

With the massive development of science and technology, Prof. Mahfud MD emphasized that the form of state defense as the embodiment of national defense must be adapted to the situation and conditions as well as the forms of threats faced today and in the future. The threats that currently haunt Indonesia are not only military or physical threats, but also other threats such as global competition, free trade, efforts to weaken Human Resources (HR), destruction of socio-cultural life, destruction of diversity, the emergence of intolerant attitudes, and undermining nationalism and the swift flow of information that must be addressed carefully and wisely by the millennials.

Concluding his general lecture, Prof. Mahfud MD left a message for New Students in UNS for the class of 2020 can become a clean leader with integrity, who avoid corruption, collusion, and nepotism (KKN). He mentioned that if the future leaders are corrupted and have no integrity, it will cause citizen nationalism to fade which in turn it will affect their state defense attitude. Humas UNS