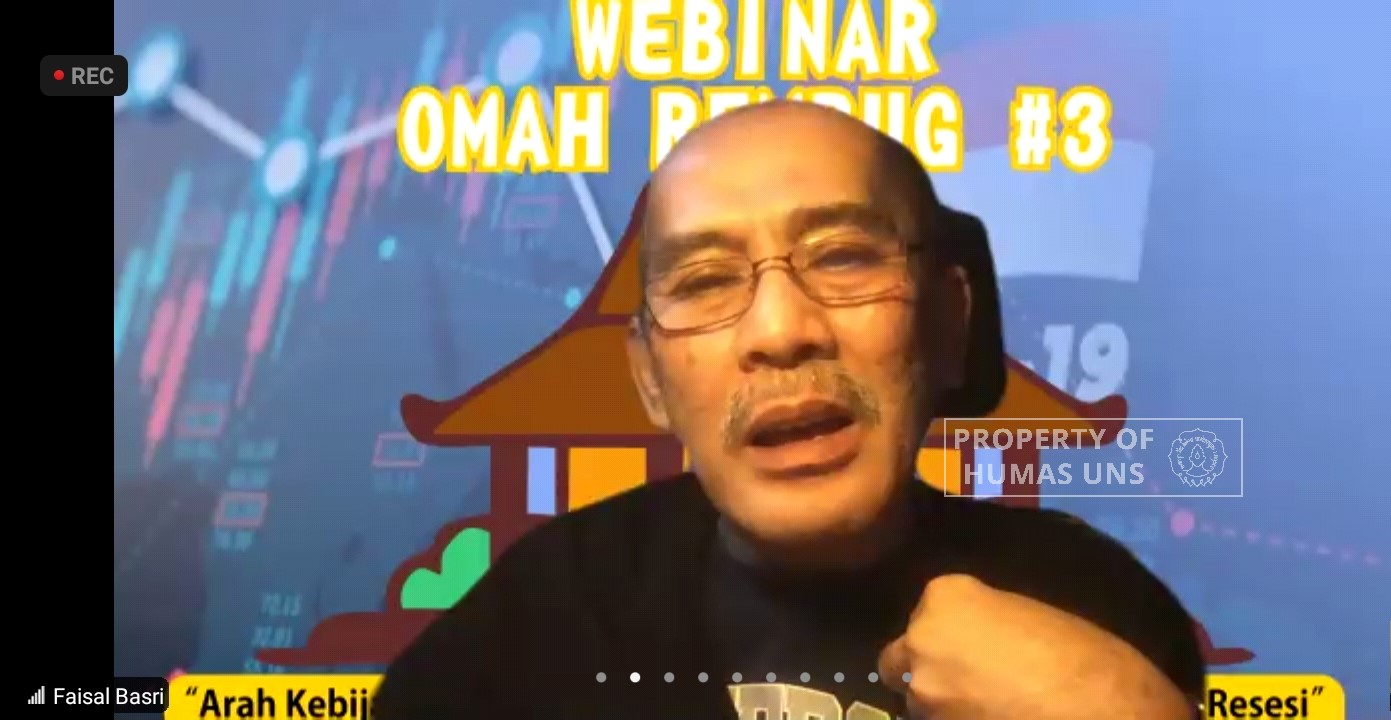 In the webinar held by Student Executive Board (BEM) of Faculty of Economics and Business (FEB) UNS through Zoom Cloud Meeting, Lukman Hakim, Ph.D shared his material on “Monetary Policy and Economic Uncertainty”. He stated that the paradigm of monetary policies in Indonesia is exogenous in nature. This means, the paradigm is prepared based on want and not need. Thus, if incompatibility is found in the future, it is possible to replace it with the new one. While from the endogenous paradigm, the issue faced by Indonesia economy is the shallow neglected financial sector.

Lukman Hakim, Ph. D explained that the Financial Deepening ratio M2/ GDP Indonesia is under 50% while other neighboring countries such as Singapore, Malaysia, and Thailand have reached over 100%. “Tend to respond to the external paradigm. Since reformation (Indonesia) has used the foreign concept which is not appropriate for Indonesia, such as an independent central bank which recently is disputed by the Minister of Finance and the president,” Lukman Hakim Ph.D. explained. Further, he mentioned that the independence Bank Indonesia (BI) as the central bank brought a debate on the agenda concerning the effectiveness of monetary policies amid the Covid-19 pandemic in Indonesia.

Based of Law (UU) Number 3 of 2004 and Law Number 6 of 2009, BI has a position of independent state institution in carrying out its duty and authority is free from interference by the government and other parties. “What unfortunate from those laws is the abolishment of BI function as the agent of development that is very beneficial from MSMEs and the community,” he stated.

Following the description from Lukman Hakim, Ph.D, the economist from UI, Faisal Basri, S.E., M.A stated that Covid-19 pandemic that hit the world caused supply shock for the global manufacturing sector. This occurs because many factories in the global supply chain stop their production which caused the aggregate supply to shift. “Thus, Covid-19 hit the aggregate supply and demand from the economic sector. In Wuhan, as the center for global production, supply change leads to a disturbance in the supply of various products and caused a supply chock and because of lockdown many people were laid off, then community income goes down, and in turn, the aggregate demand also experienced shock,” Faisal Basri, S.E., M.A. explained.

Considering the condition in Indonesia, Faisal Basri, S.E., M.A predicted that the number of Sars-Cov-2 infected people will reach up to 500,000 on the 23rd November 2020. He added that contact tracing is suboptimum which will bring Indonesia to share a similar fate with Iran. In front of the participants, he suggested that the government prioritize the health crisis handling instead of economic sector improvement because the community is still worrying if the pandemic will continue. Even though the government has distributed aids in the form of food packages and cash through the social safety net, Faisal Basri, S.E., M.A thinks that the community will save those aids.

“This is why the economy should be patient. It is a one-way lane, one car. Let the ambulance drives in the front and the economy follows behind it. We cannot implement the monetary policy because the community are waiting for the pandemic to be over. When asked to make a purchase, the community is worried and save their money in the bank. The data shows that 13 per cent are saved in the bank, but credit growth only reaches 0.1 per cent.” Humas UNS